ISLAMABAD: Pakistan’s Opposition has slammed the Imran Khan-led government for what it called “a policy of appeasement” towards terror outfits, after interior minister Sheikh Rashid Ahmed said that the government is ready for talks with the outlawed Tehreek-i-Taliban Pakistan (TTP).

Opposition leaders took the government to task during a discussion in the Senate, upper chamber of Parliament, on Monday, saying that the idea of talks with those challenging the state had emboldened extremists groups, the Dawn newspaper reported.

The Opposition leaders slammed the government for what it called “a policy of appeasement” towards terrorist outfits, it said.

They voiced concern over talks with TTP, which were being held through the Afghanistan government that was not recognised by any country of the world, the report said.

Earlier addressing the Senate, Rashid said the government was ready to hold negotiations with TTP but warned that any group posing threat to the country’s national security will be dealt with an iron fist, the Express Tribune reported.

He said the number of terror incidents in Pakistan has witnessed a surge since August 15 following the fall of Kabul to Taliban.

The Opposition Senators said the recently unveiled National Security Policy be discussed in Parliament and that an internal security policy, as well as the Afghan strategy, should be framed in light of that discussion, the Dawn newspaper reported.

He said that the TTP kept on violating a ceasefire agreement, but the government still says its doors are open for talks.

Senator Tahir Bizenjo of the National Party underlined that over the last 10 days, eight terrorist attacks had taken place across the country, while his colleague Nawabzada Umar Farooq Kasi said negotiating with terrorists only encouraged them.

Responding to the Opposition, Rashid said no talks were currently being held with the TTP since their demands were considered to be against the country’s security interests.

TTP is an umbrella group and is a separate organisation from the Afghan Taliban.

In November, Pakistan announced a month-long cease-fire with the TTP.

The group has been behind numerous attacks on security forces and civilians over the last 14 years.

The cease-fire ended on December 9 and since then, the group has resumed attacks.

The Taliban, who brokered the monthlong truce, have assured Islamabad that they will not allow TTP to use Afghan soil for violence in Pakistan.

Pakistani authorities say the talks with the TTP failed because they presented demands that were non-negotiable.

The demands have not been publicly disclosed.

During the discussion in the Senate, Jamaat-i-Islami Senator Mushtaq Ahmad asked who actually negotiated with the TTP, and what were the terms of these talks. 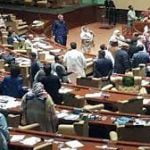 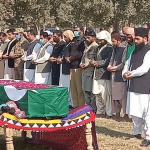