All of Pakistan has been on the knife’s edge for over 72 hours after fighters from the Balochistan Liberation Army (BLA) engaged Pakistan’s Frontier Corps (FC) troops at its headquarters in Noshki and Panjgur inflicting heavy casualties. The two towns lie in Balochistan and are around 460 km apart, clearly showing the depth and coordination of Baloch nationalists.

Pakistan has blocked the Twitter accounts of journalist Bahot Baloch (@bahotbluch) and BLA spokesperson Jeeyand Baloch (@Jeeyand_Baloch2). Local newspaper, The Balochistan Post too had its account suspended for a while. Media continues to be blocked.

The Pakistani military has claimed that it has killed 20 Baloch attackers and lost nine of its men. On the other hand, the BLA claims that it killed over 195 Pakistani FC men and lost 16 fighters in its attack called Operation Ganjal.

However, the two warring parties—the Inter-Services Public Relations (ISPR) of the Pakistani army and the BLA fighters—agreed on one point that the intense fighting has ended.

Pakistan watcher Mark Kinra told India Narrative that it is difficult to ferret out the truth from the twin attacks. “Considering there is a media blackout in Balochistan and the social media handles are suspended, it is difficult to ascertain truth at this time. I think we will get to know about the Pakistani personnel casualties only later”.

Images from FC headquarters in Panjgur. Several vehicles and buildings were destroyed during the 72 hour siege. pic.twitter.com/gx5xd0vTzN

The intensity of the attack by the Baloch group has taken the world by surprise and deeply embarrassed Pakistani forces. A handful of Baloch fighters captured the Frontier corps (FC) headquarters in Panjgur through a bomb and gun attack for three days and then held at bay Pakistani Army drones, armed personnel carriers and helicopter gunships for nearly 72-odd hours before forces could take back the Panjgur camp.

Pakistan had to impose curfew as well as evacuate people from the vicinity of the Panjgur FC camp.

Cᴀʟɪʙʀᴇ Oʙsᴄᴜʀᴀ ❄ on Twitter: “#Balochistan #Pakistan: The leader of the Baloch Liberation Army (BLA) faction that carried out the recent Inghimasi-style attacks, Basheer Zeb, is seen in a new video.He is flanked by fighters very well armed with Afghan-origin hardware; M4 Carbine/ACOG/PEQs, and a M32A1 MGL. pic.twitter.com/EGTmN6ZVuv / Twitter”

Balochistan #Pakistan: The leader of the Baloch Liberation Army (BLA) faction that carried out the recent Inghimasi-style attacks, Basheer Zeb, is seen in a new video.He is flanked by fighters very well armed with Afghan-origin hardware; M4 Carbine/ACOG/PEQs, and a M32A1 MGL. pic.twitter.com/EGTmN6ZVuv

There has been much speculation about the daring shown and the weapons used by the Baloch nationalists in their twin attacks. Weapons research handle on Twitter, Calibre Obscura has published Baloch fighters with “Afghan-origin hardware; M4 Carbine/ACOG/PEQs, and a M32A1 MGL”, proving that the Baloch armed groups are in touch with their Taliban comrades.

Kinra says: “One thing which has been corroborated is that the BLA has developed a modus operandi to breach the security of the Pakistani Army and hold it for 72 hours. This became possible due to two factors—Operation Ganjal had support from allied organizations in Baloch Raaji Aajoi Sangar (BRAS) and the Tehrik-i-Taliban Pakistan (TTP) factor. The TTP is providing logistical support to the Baloch as it has a presence in Balochistan and has led attacks in the region”.

Even as the Panjgur fighting was going on, Baloch nationalists blew up a paramilitary vehicle in Dera Bugti district, killing one paramilitary soldier and three pro-government tribal militiamen. Balochistan is famous for the Pakistani State-run “death squads” that kidnap, torture and kill Baloch youth and strew their bodies randomly to create fear among the populace.

During the same time, the Baloch fighters also claimed to have fired rockets on the Pakistani naval base of Turbat in Kech district. Rattled by the ferocious attacks, the Pakistani Interior Ministry issued a threat alert for the second time on Friday.

British newspaper The Guardian reported that Pakistani officials feel the deadly attacks on Pakistani forces have been timed with Prime Minister Khan’s visit to China.

Kinra sums up the Balochistan situation: “With the ongoing spate of attacks, one thing is clear—the Baloch nationalist struggle is taking a defiant approach which means complete independence and indiscriminate attacks across Pakistan”. 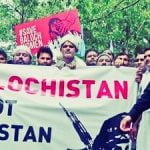