Well-known Baloch activist Professor Naela Quadri Baloch is in India, touring the country and garnering support for the recently formed Balochistan Government-in-Exile. She is also highlighting the struggle for Baloch independence while seeking support from India.

India Narrative speaks with Professor Baloch at an interaction held at the Mumbai Press Club earlier this week. Professor Baloch speaks about her journey in India, the Balochistan Govt-in-Exile, support from the Indian civil society and much more.

Excerpts from the interview:

IN: You have been a frequent visitor to India but have been away from the country since 2016. Was it related to visa issues?

NQB: This is wrongly interpreted in the media, my visa was never denied but it was delayed but Sushma ji intervened and later I travelled to India. My 2016 travel to India was about Balochistan and to get support from India, which has been lingering on for a while now, while human lives were being lost in Balochistan on a daily basis. As India remained silent, I travelled to India in 2016 to form a Govt-in-exile, which was the 3rd futile attempt by the Baloch to establish a government since 1948.

In India, I campaigned for almost one year connecting with the people, civil society members and even met Indian Baloch in various parts of India. Baloch community in India also got confidence and their identity got a boost.

Initially, our strategy was to get all the Baloch groups together, where we can develop a Constitution, a vision and roadmap towards our Govt-in-exile but due to certain differences we couldn’t manage. Moreover, Pakistan was out there to sabotage our efforts at each and every stage. So we changed our strategy, to protect and safeguard our efforts we worked on our own, formed a core group and gave them the mandate to get support for our Govt-in-exile.

IN: We see that you are touring all over India – the Golden Temple, Jallianwala Bagh and the Martyrs statue in Ludhiana. You also spoke about Subhash Chandra Bose. What is the message that you are trying to give?

NQB: India has always been united and strong; don’t let enemies to break your fibre in the name of religion. Look how Pakistan is killing us. Pakistan’s creation is to weaken India. A united and strong India and its support to Baloch can contain Pakistan and eradicate Pakistani terrorism from South Asia. And once this happens, world will be thankful to us.

IN: On 21 March 2022, you formed Balochistan Govt-in-Exile. What has been the progress after that?

NQB: Many Baloch people and groups have joined the movement, especially the youth. From three countries, now eight countries are rallying their support to our Balochistan Govt-in-exile. We have formed different committees in various countries who are working to garner support and highlight Baloch cause around the world.

Q: Don’t you think if other Baloch leaders living in exile or tribal leaders in Balochistan provides you support, it will catapult your movement?

NQB: Our struggle is for the larger good of Balochistan. I am happy if others leaders join in our movement as ultimately our goal remains the same, freedom of Balochistan.

IN: Has there been any interest from the Indian side for a Balochistan Govt-in-exile?

NQB: For me, it is the people of India – their love and support which brings me to India. Civil society is standing with me. Without them, it is not possible to roam around the streets of India like this. People of India invited me and I came.

IN: Is the poor economic condition in Pakistan impacting the Baloch people?

NQB: Balochistan is getting nothing from Pakistan actually so if Pakistan economic condition downgrades further, it will affect people of Punjab, Army Generals – their kickbacks on deals but not the Baloch people. It is likely that there will be fewer attacks on us and they won’t be able to continue their genocide considering they spent millions of dollars to commit these atrocities on us. So they won’t be able to continue that, so weakening of Pakistan is not a problem for us, they are not giving us anything, they are looting our resources. Currently, Pakistan is not able to take more resources because the Baloch nation is resisting, we are fighting hard.

Well-known Baloch activist Professor Naela Quadri Baloch is in India, touring the country and garnering support for the recently formed Balochistan Government-in-Exile. She is also highlighting the struggle for Baloch independence while seeking support from India. India Narrative speaks with Professor Baloch at an interaction held at the Mumbai Press Club earlier this week. 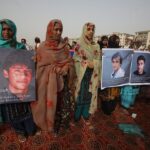 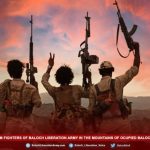