In Kalat, a power transmission line was destroyed with explosives by BLA fighters near Mangochar.

In another attack, a communication tower was destroyed in Khost, Harnai.

BLA will continue to target occupying Pakistani military and its interests until the independence of Baloch motherland. 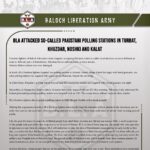