Recently, the Majeed Brigade of the Baloch Liberation Army at Karachi University released the last video message of Shari Baloch alias Barmash who carried out a suicide attack on the teachers of the Confucius Institute of China.

The alleged commander of the BLA Majeed Brigade can also be seen at the beginning of the eight-minute video message, in which he addresses the Chinese president and says, “He must leave Balochistan, otherwise hundreds of men and women of the Baloch nation Women are ready to resist. ” The video also includes several photos of Shari Baloch and in one place Shari Baloch can be seen walking in a park.

In the last part of the video, it appears that a few seconds before the attack, he also recorded a sleep message for his family, while the same sleep message can be heard saying “they are coming”, which seems to indicate that Chinese citizens Car is coming

Shari said that we women can get politics, protest, education, we can sit on the streets and protest for our missing persons then why can’t women fight. Baloch women should be the companions of their brothers, join the war.

“I am sure that after my action, Baloch women will join the war,” she said. Will be traveling with his brothers and colleagues.
And it can happen in the form of any frontal and martyrdom attacks, I am sure they will be part of this war.

“I want to tell my Baloch comrades, my elders and my brothers not to stop their women from following this path,” she said.

Shari Baloch further said in the video message that there is no shortage in my life, I also have two innocent children but this is a journey in which such decisions have to be taken. We must be the companions of our brothers. We must do whatever we can. It can work in a suicide attack or in other cases. Women should come and take part in it. So I have a happy life too, I have innocent children, I am leaving them and sacrificing them. I won’t worry about that at all.

In one part of the video message, Shari Baloch can be seen wearing Majeed Brigade uniform and she says I am grateful to my Majeed Brigade colleagues for giving me this honor and respect and giving me the opportunity to take this action. I am proud to be the first female martyr.

In the last part of the video message, it can be heard that she is sending a message to her children, father and family through voice note. It seems that this audio was recorded at the time when she was about to attack.

It should be noted that four people, including three Chinese teachers of Confucius Institute, were killed and four others, including security personnel, were injured in a suicide attack on April 26 at Karachi University.

The Baloch Liberation Army claimed responsibility for the attack. A spokesman for the organization, Jayend Baloch, said in a statement that the attack was carried out by the first female martyr of the BLA’s Majeed Brigade. 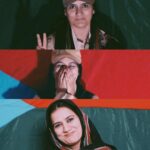