Doctor Liaqat Sunni, Professor at the University of Balochistan and head of the Brahui Department who contributed extensively to the Balochi and Brahui literature was recently abducted by the Pakistani forces. Dr Liaqat is a brilliant writer who wrote about the ongoing oppression and suppression of Baloch people, especially about the ‘Missing Persons’ in his poetry. He was admired by the society for his brilliant poetry but unfortunately, we live in such a society where for our existence we have to go “Missing”, bear torture or get killed at the hands of Pakistani security forces.

It’s not unusual in Balochistan to hear about people getting killed or abducted by the state authorities. Professors, teachers, students, farmers, journalists even members of local police are being targeted by the ISI and its sponsored Death Squads. Anyone who demands basic human rights is a target for these authorities. Their is a ban on freedom of expression and anyone who dares to violate this law of the jungle is whisked away or killed.

Professor Liaquat Sunni was abducted and fortunately released later but our other leaders and intellectuals were not so lucky. The likes of Saba Dashtiari, Ghulam Mohammad, Lala Muneer, Sher Mohammad, Hameed, Fida and thousands of others were killed because Pakistan uses force against anyone who expresses themselves or speaks truth about Pakistani oppression in Balochistan. It is with tears in my eyes that I am writing their stories.

Being a Baloch is a crime that every Baloch faces in Pakistan. I want to tell the story of a family who lives in Khuzdar, Balochistan. Their several sons were killed by Pakistan Army, ISI, and the Frontier Corps (FC). Asmat and Zubair Jan were cousins who belonged from Khuzdar. Asmat Jan was a servant at the Sheik Zayed Hospital, Khuzdar and Zubair Jan was a high school student. The brothers were going to their home for Eid holidays when they were abducted by Pakistani security forces on their way home. Thereafter the government officials informed the family that Asmat and Zubair are innocent and will be released soon. However, after Eid the distorted dead body of martyr Asmat Jan was found and later on the dead body of Zubair Jan was recovered.

Sami Baloch another resident of Khuzdar was abducted near the Khuzdar University on October 1, 2010 while he was on the way to his fields in the countryside. Sami Baloch was also abducted by Pakistan Army-sponsored Death Squads, and for 45 days he remained “missing”. All these days Sami Baloch’s family kept looking for him, they went to the local sardars (tribal chiefs) but in response they got only false assurances about his recovery. During this period an ISI officer telephoned the family and assured the release of Sami Baloch on Eid. However, on the day of Eid, Sami Baloch’s family received his mutilated body. “Eid Mubarak” was written on his dead body. On August 12, 2012 his father Ghulam Qadir was also martyred by the ISI hired targeted killers.

On October 18, 2010 Majeed Zehri a student in Karachi was returning home for Eid holidays when he was kidnapped and later his mutilated dead body was thrown away. The officials of Pakistan Army claimed that they have Majeed Zehri in custody yet they killed him in cold blood without bringing him to any court. Later, Majeed Zehri’s father was also martyred on February 2, 2012.

Similarly, Zakaria Baloch another student who was studying in Polytechnic College, Quetta met with the same fate. Zakaria Baloch was also abducted by the Pakistan Army and later his mutilated dead body was found. Yaseen Baloch student at Khuzdar University was sitting at his shop in Anjeera when Death Squad members opened fire and martyred him. Ibrahim Baloch, a police officer and Fareed Baloch were also target killed by Death Squad members.

Ghaffar Baloch a shopkeeper and political activist of the Baloch National Movement (BNM) was targeted when he was sitting in his shop. In the same way Sarfaraz and Nisar Jan two teenage high school students were targeted by Death Squad members when they were returning from their exams. Yaqub Baloch and his 11-year-old son Abdul Rauf uncle of Sarfaraz shared the same fate.

Abdul Samad a brilliant and gifted student who got a golden scholarship of 75 thousand rupees per month at the Khuzdar University was target killed by the Pakistan Army-sponsored goons. All these students were from one family.

These are some cases which show the situation in Balochistan. There are thousands of stories of such crimes committed by Pakistan. 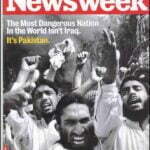 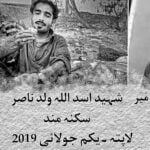