The new governor of Balochistan is likely to be Sardar Sarbalund Khan, the leader of the People’s Party.

In Balochistan, the largest province of Pakistan by area, the post of governor has been vacant since April 13. After the resignation of Zahoor Agha, John Muhammad Jamali is serving as acting governor.

Sources have said that the notification for the appointment of Governor Balochistan is likely to be issued in a few days. 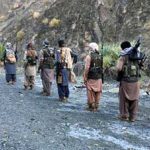