The police official said that the suspected militants were riding a motorcycle hurled the grenade at the post and sped away, Dawn reported.

The police official further said that the injured soldier was immediately shifted to the Nawab Ghous Bakhsh Raisani Memorial hospital after the attack.

A similar incident was reported on Monday where a policeman was killed and another was injured in the Bajaur District of Khyber Pakhtunkhwa province. In this also, the unidentified assailants attacked a check post in the Sheikh Baba area of Mamond tehsil.

After the attack, the victims were shifted to the District Headquarters Hospital, Dawn reported.

According to the residents, both the victims were standing outside the post when the firing took place.

The official said an FIR of the incident had been registered.

Earlier, on September 2, a policeman was killed in Dera Ismail Khan District when unidentified gunmen opened fire at him while the official was going to duty, local media reported.

An official at the Choudhwan police station said the attackers opened fire on the driver of a police mobile van, namely Zahuruddin, a resident of Daraban Kalan. As a result, he died on the spot.

The attackers escaped the scene after committing the crime, the official added.

Soon after the incident, a police contingent reached the spot and surrounded the area to arrest the attackers, Dawn reported.

The attacks on policemen in Pakistan are rampant. In recent months, several cases have been reported in the country.

A similar kind of incident was reported on August 19, where two policemen were killed when a remote-controlled blast targeted a police post in the Damadola area of Mamond tehsil.

Meanwhile, on August 7, at least three people including a policeman were injured in a remote-controlled blast that occurred in Quetta’s Hazar Ganji area.

The bomb was planted in a motorcycle parked near Hazar Ganji market.

An official from the related department said that as many as 63 cops have lost their lives in target killings and other attacks in the current year, the highest since 2016.

The first half of July this year witnessed the worst situation in the past eight years. Apart from target killings by the armed attackers, a number of police stations, posts and vans have been attacked with grenades in the last several months.

Observing the rising incidents of attacks on police in Khyber Pakhtunkhwa, Pakistani authorities have strengthened security at all check-posts and relieved the personnel responsible for security lapses. (ANI)

This report is auto-generated from ANI news service. BalochMedia holds no responsibility for its content. 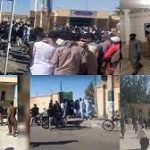