The rain and the cold in Quetta, the capital of the Pakistani province of Balochistan, did not deter them. Neither did the floods that ravaged their homes. The families of Balochistan’s missing had been protesting for days outside the provincial government’s headquarters. On August 25, one of the protestors, Seema Baloch, the sister of Shabbir Baloch, a student leader who had been missing for weeks, fell unconscious and had to be taken to a nearby hospital. The others simply kept protesting.

Government officials gently asked them to leave, but when the protesters asked about the missing—all allegedly abducted by Pakistani security forces—the officials professed ignorance or, worse, helplessness.

Baloch activists claim that nearly a thousand people disappear every year, abducted by the Pakistani security forces. The security forces link nearly all of the missing to Balochistan’s independence movement. The call for independence is rapidly gathering momentum there.

It’s not a new call. On August 12, 1947, the eve of Pakistan’s birth, the Khan of Kalat and ruler of most of Balochistan, Mir Ahmad Yar Khan, announced that Balochistan would be independent, part of neither Pakistan nor India.

But Pakistan’s Governor General, Mohammed Ali Jinnah, had other plans.

Jinnah threatened the Khan of Kalat and other Baloch tribal leaders with the newly formed Pakistani army. Yar Khan reluctantly agreed to Balochistan’s accession to Pakistan in April 1948. But 18 days later, Jinnah’s government asked the Pakistani army to invade Balochistan anyway. The army arrested Yar Khan and, in the months that followed, jailed Baloch leaders and imposed martial law.

The Baloch people have never forgotten. Today, they are once again demanding independence from Pakistan. Some have become violent. They accuse the Pakistani army, a looming presence in the region since 1948, of violence against them. Bombings and kidnappings are now a daily occurrence. Balochistan has become dangerously unstable, and the West does not care.

Balochistan occupies nearly 44 per cent of Pakistan’s land mass and borders Iran’s Sistan Province, home to many who also call themselves Baloch. The province has some of the world’s largest copper and gold deposits, and rich stores of coal, oil, and natural gas. Last year, the state-owned Pakistan Petroleum Corporation announced the discovery of huge gas reserves there: one trillion cubic feet.

Leaders of the three major political groups that seek independence—the Free Baloch Movement, the Baloch Republican Party, and the Baloch National Movement—are in exile. Another group that seeks independence, the Baloch Liberation Army, operates from within the province. It is not above using bombs and violence to achieve its ends.

The leader of the Baloch National League, based in Europe, which seeks to unite Balochistan’s independence movements under a single banner, told me, ‘We are being hunted by the Pakistani establishment. We fear for our lives, even in exile.’ My sources would speak only on condition of anonymity, fearing for their lives.

The uproar threatens the China-Pakistan Economic Corridor; the port of Gwadar; gold, copper, and uranium mines; and even Pakistan’s nuclear complex in the Chagai Mountains of Balochistan.

Nearly a third of the China-Pakistan Economic corridor passes through Balochistan. Through the port of Gwadar, the corridor connects Kashgar in China’s Xinjiang province to the Arabian Sea, providing Beijing with a link to the Strait of Hormuz, the Persian Gulf, the Arabian Sea, and the Indian Ocean.

China has committed to investing more than $60 billion in this route. It is strategically imperative for Beijing not only because it’s part of the Belt and Road Initiative, but because it gives China a land route to the Strait of Malacca, the world’s most critical maritime chokepoint.

Sources in Balochistan told me that a joint venture company, Jiwan China, is secretly building a naval base in Jiwani, a small town with a port very near Gwadar. They also said China and Pakistan were privately forging a plan for China to station more forces in Balochistan to secure its investments.

Apart from the recent devastation caused by floods, political unrest in Balochistan has grown rapidly. Sources tell me the freedom movement now has deep roots. According to one, the Baloch independence movement may be led by political and guerrilla groups, but it has the full support of the Baloch nation: ‘Islamabad is an occupier and coloniser who has colonised and occupied Balochistan. A coloniser and occupier will never develop a region but will loot and subjugate it,’ says one Baloch National Movement leader.

Islamabad disagrees, claiming that the separatists are a fringe group. Nevertheless, my sources say that Islamabad has deployed the Pakistan Army, along with the Frontier Corps, throughout Balochistan, with some four to six small army camps in each district and one or two major camps in each; all total, there are nearly a quarter of a million army personnel there. They say the army’s operations are devastating: The military raids homes, they say, and disappears people in large numbers; it dumps the dead bodies in the streets and the hills, and conducts air strikes that kill, injure, and damage property.

The Balochistan Human Rights Commission, in a report released in May this year, claimed there were 442 disappearances in the province in 2021, involving fake encounters, abductions, extrajudicial killings, targeted killings, and torture by Pakistani forces. The primary targets were Baloch students and activists demanding greater autonomy or independence for Balochistan.

In August, Pakistani security forces reportedly raided a college dormitory in the city of Quetta in Balochistan, beat up four students, then arrested them without charge. In the city of Turbat, security forces arrested freshman student Yousuf Nisar as he returned home from a soccer match. The families of the detainees say they were given no reason for their arrest.

Leading Baloch separatist figures say the students were arrested because of their sympathy with the independence cause. A leader of the Baloch Liberation Front, a group that has long fought the Pakistani army and sought independence, told me that the police and the army suspected them of being activists. In some cases, the boys had actively espoused the cause, but ‘in most cases the mere hint that they support Baloch nationalism is enough,’ he said. Often, the visibly tortured bodies of the abductees are thrown into the mountains. The Baloch Voice Association, a Paris-based nongovernmental organisation, is planning a three-day banner and poster exhibition on these disappearances at the 51st session of the Human Rights Commission in Geneva.

The Canadian mining company Barrick Gold has been openly warned to stay out of the province by the Baloch Raji Aajoi Sangar, a conglomerate of armed separatists, I was told by a Baloch source. Two weeks ago, the company signed an agreement with the provincial government. The conglomerate has not yet responded publicly, but my sources indicate that if work on the project begins, retaliation will occur.

The provincial government, led by chief minister Mir Abdul Quddus Bizenjo, has signed an agreement with Barrick Gold that calls for a $10 billion investment and promises to create 8,000 jobs in the province. Bizenjo has seemingly delivered: job creation for locals, investment in the province, and more. But for the Baloch, that’s no longer enough, said an exiled Baloch National League leader: ‘We want the jobs. We want the investments. But we don’t want the fruits of our labour to go to Pakistan and Islamabad.’

Baloch separatists often cite Baloch natural gas reserves, among the largest in Asia, as an example of their grievances. They say the gas has been pumped out of Balochistan, benefiting Pakistan’s Punjab region, while industry in Balochistan has barely grown.

The Gwadar port is already besieged. Work on the port has been significantly delayed because Baloch activist groups have been targeting Chinese workers on the site and throughout the region. Chinese trawlers, fishing off the coast of Gwadar, have been attacked. Gwadar fishermen say that Chinese large-scale mechanised fishing is destroying the local fishing industry. ‘The people of Gwader are no longer allowed to fish in the sea as they used to. Those who are allowed can only fish in a limited area. The rest of the sea is controlled by Chinese engineers, the navy and fishing companies, and the Pakistani army,’ said a source in Gwadar.

The Baloch people oppose the China Pakistan Economic Corridor, a Baloch separatist leader told me. ‘We have not agreed to the project. It is a project that exploits the Balochs’ mineral resources, especially gold and copper.’ He told me that Baloch militants had repeatedly attacked the project’s infrastructure and the officials associated with it.

Chinese personnel and the corridor’s rail and road infrastructure have been attacked, frequently, with crudely made bombs. The violence is now so acute that in June, Beijing wanted to move in with its forces. The Pakistani government hasn’t yet made a decision. But my sources indicate that China has now quietly stationed between 1,500 and 3,000 naval personnel in Gwadar and Jiwani.

Other parts of Balochistan are similarly destabilised. Quetta, the capital, was once home to the notorious Quetta Shura, the Taliban’s inner leadership, which crossed over to Afghanistan last August. Nearly a million Pashtun refugees from Afghanistan live there now, and it remains a haven for outlawed groups that seek to impose the Sharia upon Pakistan, such as the Tehreek-e-Taliban Pakistan and the Tehreek-e-Labaik Pakistan—both of which regularly harass the Pakistani army and Islamabad.

Baloch leaders say that while groups like these are officially banned, they enjoy the patronage of Pakistan Inter-Services Intelligence, the country’s most powerful entity. A Baloch separatist leader told me that the army and ISI had given the TTP and its like sanctuary in Quetta: ‘They have no presence in the rest of Balochistan. The Baloch and Pashtuns reject these organisations. They are the mercenaries of Pakistan army,’ he said.

Whatever their provenance, Quetta has emerged as a hotbed of terrorism, with the TTP blamed for terrorist attacks throughout the country.

China and Islamabad have played a few cards shrewdly. Around Gwadar, China has begun offering Chinese language courses to locals. Beijing is actively courting political parties that have sought to join Pakistan’s broader political establishment, such as the Baloch Nationalist Party (Mengal) and the Balochistan Awami party.

The BNP (Mengal), led by Sardar Akhtar Jan Mengal, a former chief minister of Balochistan and current member of Pakistan’s parliament, rejects calls for complete independence. He wants more rights and autonomy for the province. The BAP is a newcomer to the game, formed in 2018 by dissidents from factions of the mainstream Pakistan Muslim League.

But the problems in Balochistan won’t be eradicated by teaching locals Chinese, nor by wooing local politicians. Nor were supporters of independence silenced by Islamabad. Instability in Balochistan could spill into Iran. This would destabilise the region.

But above all, it’s dragging Pakistan into the abyss.

This article first appeared on the Cosmopolitan Globalist substack. 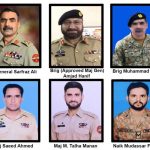