Military and intelligence officials confirmed that the officer, Lieutenant Colonel Laeeq, was abducted late on July 12 near Ziarat, a tourist town frequented by locals and officials during the hot summer.

Local sources correspondent the armed men set up a roadblock and were stopping and searching vehicles. They stopped Laeeq’s car and after learning his identity they asked him to get out of the car.

He was then abducted by the armed men. The women and children’s family members travelling with him were let go.

There has been no comment from the Pakistani military and no claim of responsibility.

Abdul Quddus Bizenjo, chief minister of Balochistan Province, has condemned the abduction and ordered an investigation. In a statement, he said an operation had been launched to ensure a safe recovery of the officer.

Local officials said a massive search operation was under way using helicopters and personnel of the Special Services Group to track down the abductors.

Balochistan Province borders Iran and Afghanistan has been plagued by sectarian violence, attacks by Islamist militants, and a separatist insurgency that has led to thousands of casualties since 2004.

Most of the attacks are claimed by the separatist freedom fighters that target the Pakistani Army in the  Balochistan. 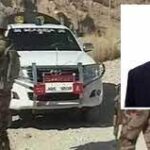