Saeedah Hameed, daughter of Abdul Hameed Zehri, who went missing from Karachi on April 10 last year, says that her father brought his children from Khuzdar area of Balochistan to Karachi for better education, but now better education is not possible. Coins

College student Saeeda Hameed while talking to Independent Urdu said that at around 3 pm on April 10, 2021, about a dozen plainclothes personnel entered our house and said that they only wanted to search.

“She had a cell phone with a picture of my father on it,” she said. They asked my father for an ID card and after verification they took him with them saying that they would release him shortly after interrogation but he has not been released till date.

According to Saeedah Hameed, her father Abdul Hameed Zehri, 47, hails from Zehri village in Khuzdar district of Balochistan, but later moved to Khuzdar.

Later, Abdul Hameed Zehri, a father of four sons and four daughters, came to Karachi for a better future for his children. In Karachi, he rented a house in Gulistan-e-Jauhar Block 13 and started water filtration work.

“My father did not belong to any political or religious party,” she said. He was a straightforward businessman. He has diabetes and he takes pills.

“It simply came to our notice then. My younger sister, brother has not been to school for over a year, because the school is demanding fees. I also dropped out of college. ”

Saeedah Hameed, along with her younger siblings, has been protesting in front of the Karachi Press Club for the past several months, taking pictures of her father along with other missing persons’ relatives. 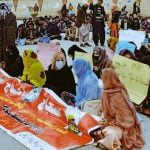