Previous Next
Protests are shaping the future of Balochistan while also modifying the socio-economic scenario of Pakistan.

The ‘Global Report on Food Crises’ released by the Global Network Against Food Crises, an alliance of the United Nations, the European Union, government and non-governmental agencies working to tackle food crises together, stated that drought conditions in Balochistan and Sindh and inadequate monsoon rainfall in Khyber Pakhtunkhwa had reduced crop and livestock production and contributed to rising national food prices.

The overwhelming majority of livestock holders (87 per cent in Balochistan and 60 per cent in Sindh) reported livestock production difficulties in three months preceding the July-August assessment because of reduced access to pasture and water, difficulty in purchasing feed due to high prices or limited access to markets, difficulty in accessing veterinary services and inputs, and livestock diseases.

Rising prices, drought, livestock diseases, Covid-caused unemployment cited among key factors behind crisis Most livestock holders experienced livestock deaths, while distress selling became commonplace in order to meet food and other needs, or due to limited availability of fodder, the report says.

In July/August 2021, around 56 per cent of households in Balochistan and 30 percent in Sindh reported their household livelihood/income had been severely affected by drought. By October 2021, drought conditions improved in Sindh due to persistent rains in previous months.

In Khyber Pakhtunkhwa, most of the analysed districts are dependent on rain-fed agriculture. However, inadequate monsoon and pre-monsoon rainfall in 2021 led to a decline in crop and livestock production. Lack of rainfall was cited as a primary contributor to lower production levels, with around one-third of farming households reporting reduced production for the main crop relative to the five-year average.

Similarly, during the six months prior to the household assessment, between 27-47 per cent of surveyed livestock holders experienced livestock deaths, largely due to limited availability of drinking water and fodder shortages. 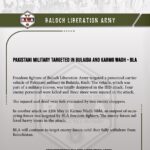