Armenia has confirmed that at least 12 of its soldiers have been captured. Just a year ago, fighting between the two countries continued for six weeks in the disputed Nagorno-Karabakh region, during which at least 6,500 lives were lost. A peace treaty was then brokered by Russia, and the war was considered a defeat for Armenia.

A statement issued by the Armenian Ministry of Defense said, “Armenian soldiers were killed and wounded as a result of fighting that broke out after the attack by Azerbaijani forces.” Has also taken over. Earlier on Tuesday, the two sides accused each other of starting fighting on their common border.

On the other hand, a spokesman for the Azeri Ministry of Defense said that the situation on the border is tense and military action is being taken to repel “massive provocations”. According to the statement, Armenian forces are targeting Azeri military bases with artillery and mortar shells, and some Armenian military hardware has been destroyed in response.

According to Russia’s Tass news agency, Armenia has asked the Moscow government for help in defending its border areas. Russia has not yet commented. The European Union, meanwhile, has called for an immediate “complete ceasefire” between the two sides.

The Nagorno-Karabakh region is the source of tension between Muslim-majority Azerbaijan and Orthodox Christian-majority Armenia. The region is part of Azerbaijan but was occupied by ethnic separatists in 1991 after the collapse of the former Soviet Union. About 30,000 people have been killed so far in the conflict. In last year’s war, Azerbaijan recaptured most of Nagorno-Karabakh.

Russian peacekeepers are stationed in the area where the clashes took place last year. Russia also has a military base in Armenia, while Azerbaijan has Turkish support in the conflict. 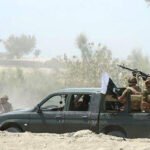