Abdul Hafeez was reportedly detained by the UAE secret services in Dubai, on January 27. His family members protested in Karachi on Wednesday for his safe release and urged the UAE authorities to not extradite him to Pakistan, as his life will be in grave danger.

Hafeez’s family members said that his passport is with the family and he has been extradited without his passport. “The intelligence agencies were calling us for Abdul Hafeez’s passport but we refused to give it to them,” family sources said.

Hafeez’s spouse, Rashida Hafeez said: On 27th January 2022, at 2 AM, several persons detained and then disappeared my husband Abdul Hafeez from the car parking of our apartment located in Amna Building International city 2, District Al Warsan 4, Dubai. “The persons who took away my husband, identified themselves to the security guard of the apartment building as members of UAE’s intelligence agency Amn Ad-Daulah. Officials of UAE’s Security Industry Regulatory Agency (SIRA) accompanied these persons and took away all the CCTV recording of the incident,” Rashida added.

It is pertinent to mention that Abdul Hafeez’s cousin and rights activist, Rashid Hussain was forcibly disappeared allegedly by the UAE intelligence agencies. Hussain was reportedly whisked away from Abdul Hafeez’s car in 2018. Hafeez was said to be the witness of the incident.

According to Rashid’s family and a similar official document, he was also illegally deported to Pakistan after 6 months of detention in the UAE. 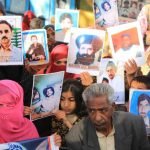