Dostin Baloch, a spokesman for the Baloch Republican Guards, said in a statement to the media from an undisclosed location that “today our officers targeted the personnel working in the Pakistani military construction company at Kot Barozai area of Sibi with a remote controlled bomb.” ۔

He said one officer was killed and two others were seriously injured in the blast.

The spokesman said that our attacks on Pakistan Army companies under construction and Pakistan Army will continue till the independence of Balochistan. 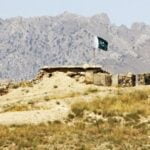