Online videos showed that hundreds of demonstrators took to the streets of the southeastern Iranian city of Zahedan the capital city of Balochistan, three weeks after dozens were killed in “Bloody Friday” protests.

“Death to the dictator,” the protesters, mostly young men, chanted Friday in reference to Supreme Leader Ali Khamenei outside a police station, in footage widely shared on social media.

Zahedan, the capital of the Sistan-Baluchistan province, is one of the few Sunni-majority cities in predominantly Shia Iran.

“Death to Khamenei” and “Unity, unity,” the protesters shouted after Friday prayers in a video shared by Radio Farda, a US-funded Persian station.

1500tasvir_en on Twitter: “In Zahedan, Sistan and Baluchestan Province, protestors chanted slogans such as “death to the dictator” and “death to Basiji.”#MahsaAmini #IranRevolution#مهسا_امینیpic.twitter.com/Y2IqH6UPL5 / Twitter”

In Zahedan, Sistan and Baluchestan Province, protestors chanted slogans such as “death to the dictator” and “death to Basiji.”#MahsaAmini #IranRevolution#مهسا_امینیpic.twitter.com/Y2IqH6UPL5

The slogans echoed those chanted in nationwide protests over #Mahsa_Amini,#Mahoo_Chabahari an Iranian woman of Kurdish origin who died in custody on September 16.

Amini, 22, died three days after falling into a coma following her arrest in Tehran by the morality police for an alleged breach of the Islamic Republic’s strict dress code for women.

Two weeks later, violence erupted in Zahedan during protests that were triggered by anger over the reported rape of a teenage girl by a police commander in the region.

The Bloody Friday in Zahedan, the provincial capital of Sistan and Baluchestan took place September 30, when security forces killed at least 93 people, and injured hundreds more. Zahedan is one of the few Sunni-majority cities in predominantly Shiite Iran.

Molavi Abdolhamid, the religious leader of Iran’s largely Sunni Baluch population, said that no one can evade responsibility for the carnage, dismissing the Islamic Republic’s official account of the events which attributed the Bloody Friday to separatists and militant groups. “They were sheer lies,” Abolhamid said.

“Unity, unity,” “Death to Basiji,” and “Death to the dictator”, the protesters chanted Friday in reference to Supreme Leader Ali Khamenei outside a police station, one of the places where the repression agents opened fire on protesters and bystanders.

Poverty-stricken Sistan-Baluchistan, which borders Afghanistan north Balochistan and Pakistan Eastern Balochistan, is a flashpoint for Baloch freedom fighters gangs, as well as rebels from the Baluchi minority and Sunni Muslim extremist groups. 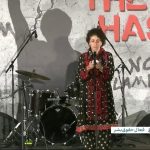