Previous Next
What is the position of government officials?

“Allah gave me two sons but Pak security forces humans took them both away. Now I have no male offspring to support in old age.

On the recovery of Asad Nasir’s body from Iranian Balochistan, Deputy Commissioner of Ketch District Hussain Jan Baloch said that his death was not in Ketch but in Iran after which the Iranian authorities handed over Asad’s body to Pakistani authorities. He said that Asad Nasir’s family members have not contacted the government officials so far and have not registered an FIR in this regard.

Asad Nasir was picked up from home?
Asad Nasir, 35, was married and the father of three children, aged between four and six.

Asad’s father, Haji Nasir, told the BBC that Asadullah Nasir had studied up to FA, after which he was running a shop because he could not find a job.

Haji Nasir claimed that on the night of July 1, 2019, while he was sleeping in the yard of his house, there was a sudden knock on the door of the house. “When I opened the door, security forces in uniform and plain clothes were standing outside.”

“When they asked about my eldest son Asad Nasir, I told them he was at home and sleeping.”

According to Haji Nasir, they entered the house and grabbed Asad Nasir’s hand and pushed him aside. Then the rooms were searched. After that they started taking Asad Nasser and his mother and sisters started crying and shouting that don’t take him, he has not committed any crime.

Haji Nasir claimed that on this occasion, the security forces personnel replied, “Don’t worry, they will be released in the morning.” But he was not released. ”

Haji Nasir claims that he did not register an FIR against his son’s unconstitutional arrest after this incident. There are two reasons for this. The first is the fear that his son might be harmed during the alleged detention, and the other is the assurance given by security personnel that Assad will be released after interrogation.

“We were told the son would be released in three months.”
According to Haji Nasir, he met provincial and federal ministers from Ketch and requested for his son’s recovery. “They all reassured me that my son would recover.”

Two years have passed. When Asad Nasir did not return home, Haji Nasir once again met with influential politicians in the area to facilitate his son’s return home. “When I met them again, I was told that my son would be back in three months.”

Some time ago, videos released by Asad Nasir’s two younger sisters and his son also surfaced on social media in which they are seen appealing to the federal and provincial ministers for the recovery of Asad Nasir. According to Haji Nasir, his wife has lost her memory due to trauma during this period. Haji Nasir said that the videos based on the appeal of Asad Nasir’s son are three or four months old and he was not informed about the death of his son. He says that at the request of his grandson, his father did not come alive but the body did come.

The case of finding the body of Asad Nasser in Iran
Haji Nasir alleged that his son was detained in Turbat but his body was later dumped in Iranian territory adjacent to Balochistan. Government officials deny the allegations.

Haji Nasir says, “Was the land of Balochistan so narrow that there was no place to dump the body?”

According to Haji Nasir, Asad Nasir’s body was found in Pir Kahur area of ​​Iran which is located at a distance of about 30 kilometers from the Pakistani border. Talking to BBC, he said that he was aware of the area from which the body was recovered. “People there saw a slip with the body and informed us.”

Haji Nasser also claims that three people were shot dead in the area, killing two people, including Nasser, but one survived, who is now in the custody of Iranian authorities. “We are being told that the man has been taken to Zahedan, where he will be transferred to Tehran for interrogation after receiving medical treatment.”

According to Haji Nasir, at the border point of Redig, two bodies were received by the Pakistani authorities from the Iranian authorities and then handed over to their heirs.

On the other hand, according to Nasrullah Baloch, chairman of Voice for Baloch Missing Persons, an organization of relatives of missing persons, Asad Nasir’s name was included in the list of missing persons which was also given to the government. What is the position of government officials?
Balochistan Home Minister Mir Zia Langu had taken a stand on the killing of two children during a press conference two days ago that some elements were making baseless allegations against the security forces while the peace in the country was due to the sacrifices of the security forces. Established

The BBC tried several times to contact Balochistan Home Minister Mir Zia Langu on the phone to know the official position on the allegations made by Haji Nasir, but he could not be reached. A message was also sent to him in this regard on WhatsApp but he did not reply.

On the other hand, the Deputy Commissioner of Ketch Hussain Jan Baloch told the BBC that both the people including Asad Nasir were killed not in Ketch but in Iran. He said that the bodies of these persons were handed over to Pakistan by the Iranian authorities which were also duly documented. “It is clear that these people were not killed in the catch, but in Iran.”

According to Deputy Commissioner Hussain Jan Baloch, Pakistani authorities had recovered the bodies of two persons, one from Asad Nasir and the other from Kalat who were handed over to their heirs.

He said that the relatives of Asad Nasir have not contacted the local administration so far and no FIR has been registered. Yasir before Assad
This is not the first time Haji Nasir has had to go through such trauma. In 2010, his youngest son Yasir, who had gone to Gwadar to do FA after matriculation, went missing along with a friend. According to Haji Nasir, his son’s friend was released a few days later but eight months later Yasir’s body was found in Margap area of ​​Ketch district.

According to Haji Nasir, both his sons belonged to the Baloch Students Organization Azad in their student days. But he says his two sons did nothing wrong. “If they had committed any crime, they would have been produced in court and punished.”

“I don’t have a son anymore. Allah Almighty had given me two sons who were taken away from me by human beings. Now I have only six daughters. “ 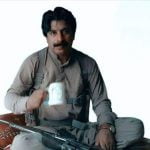 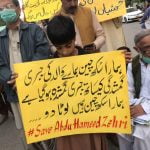