Amir Ahmed Suleman Daud Jan Ahmedzai, officially known as His Highness the Khan of Kalat, has written to the UN asking to hold a free and fair referendum in Balochistan to allow him and the Baloch people to vote for freedom from Pakistan rule.

In a letter to the UN which was shared by Tarek Fateh, a Pakistani journalist, the exiled king of Kalat of Balochistan said that, “ the current Khan of Kalat and my nation Balochistan do not want to be a part of Pakistan anymore and request the United Nations to conduct a referendum in Balochistan under the supervision of the UN.”

BREAKING: Khan of Kalat in #Balochistan demands UN help end Pakistan’s OccupationHis Highness the Khan of Kalat, Mir Ahmed Khan Ahmadzai has asked @UNHumanRights to hold a referendum in Pakistan-Occupied Balochistan to allow him and the Baloch people freedom from Pakistan rule. pic.twitter.com/aO9fvZwEnO

Khan says that “Balochistan is on fire” as the Pakistani forces have crossed all the limits in their atrocities on innocent Baloch people.

“The UN should recognise Balochistan as an occupied land and ask Pakistan to withdraw its forces and allow the people of Balochistan to live a normal life like other nations in the world. In order to stop Baloch genocide the UN must intervene before it is too late.”

He is certain that over 90% of the people will vote in favour of freedom. Why then is Pakistan keeping the region under its control forcibly? Pakistan cannot be allowed to literally annihilate an entire race with the use of brute force. Presently its actions in Balochistan can be categorised as crimes against humanity, genocide and ethnic cleansing.

“The situation in Balochistan is very bad. There are no accurate estimates, more than 80,000 people are said to be missing and killed and over a million displaced. Pakistan’s rule over Balochistan has never been legitimate, now it has lost control over Balochistan.”

Khan says that the conflict between Balochs and the Pakistani government further intensified due to CPEC as billions of dollars of Chinese money is flowing in to take control of the region’s natural resources.

“If the Punjabis (of Pakistan) and Chinese succeed in their CPEC plan, the Baloch will become an ignorable minority and lose their land, culture and way of life permanently,” he said in his letter to the UN.

Khan fled Pakistan in 2006 when the Pakistani army started killing prominent Baloch leaders on the order of the then dictator Parvez Musharraf. Since then Khan and other Baloch leaders in exile are consistently highlighting the plight of their people across the world and especially in forums associated with the United Nations.

With the recent attacks on the Pakistani forces by the pro-independence Baloch leaders, Balochistan, the most restive province of Pakistan, has entered into a new era of violence and dissent. 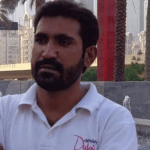