Pakistan blast: The so-called ISIS group claimed responsibility saying that one of its fighters detonated an explosive belt at a gathering of security forces.

Quetta: Seven paramilitary troops were killed by a blast Tuesday near a site in southwestern Pakistan where the president had visited less than half an hour earlier, officials said.

The so-called ISIS group claimed responsibility on its Telegram channels, saying one of its fighters detonated an explosive belt at a gathering of security forces.

The group claimed responsibility at the weekend for a suicide attack on a Shiite mosque in Peshawar on Friday that killed 62 people and injured nearly 200.

Officials said the latest assault was in Sibi district, less than 800 metres (yards) from where Pakistani President Arif Alvi attended a function earlier in the day.

Seven members of the paramilitary Frontier Constabulary were killed, according to senior police official Dostain Dashti.

“The explosion happened some 25 minutes after the president left the area,” he told AFP, adding that initial investigations suggested it was a suicide attack.

In an unrelated security operation, the Pakistan military’s public relations wing said seven terrorists had been killed in the province on Tuesday. 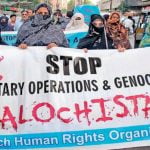