Karachi: A fierce encounter between the Pakistan Army and Baloch insurgents continues even after 55 hours have passed in the city of Panjgur in the Balochistan province of Pakistan. Baloch insurgents still occupy the headquarters of the Frontier Corps of the Pakistan Army. Pakistan has imposed complete curfew in the area. Due to the ongoing fight for the last about 3 days, now there is a shortage of ration in the homes of the people and they are upset. Meanwhile, Baloch insurgents have claimed to have killed 170 Pakistani soldiers.

The Baloch Liberation Army (BLA), which is carrying out this attack, has claimed that it has killed around 170 Pakistani security personnel in two major attacks on Noshki and Panjgur camps of Pakistan’s Frontier Corps (FC) on Wednesday night. On Friday morning, more than 55 hours after the initial attack, the BLA said it continued to capture FC’s Panjgur camp, where it inflicted over 100 casualties with the operation losing three of its fighters.
Baloch Attack: ‘Nero’ became Pakistani President, Baloch was shedding army’s blood, Arif Alvi was playing the game
BLA attacked in a planned and coordinated manner
The BLA said it called off the operation in Noshki on Thursday evening after killing around 70 Pakistani soldiers, where it lost nine of its men. The FC is tasked with guarding the borders of Pakistan. Its Noshki and Panjgur camps are located in Balochistan, about 460 km separating the two – an indication that the BLA attacked forces in a well-planned and coordinated manner. Pakistan has reportedly foiled their designs with helicopter gunships and armored personnel in the campaign against Baloch nationalists.

The government has imposed curfew in view of the fierce fighting. It has also suspended internet services in two districts and barred media from reporting from the area. Social media reports from journalists in Balochistan claimed on Friday that fighters shot down several helicopter gunships and an armored personnel carrier. Dawn newspaper reported that heavy explosions and firing continued in Panjgur till Thursday afternoon. According to Pakistani newspaper Dawn, sources said, residents of Panjgur town said that helicopters were seen hovering over the camp. 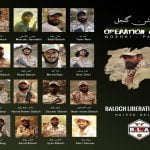