THIS NEWS IS UPDATED WITH THE LATEST REPORTS

The clerical regime’s suppressive forces attacked the demonstrators who gathered for protest in Zayanderud River bed in Isfahan on Friday morning, November 26, 2021.

Hundreds of security forces attacked the protesting farmers of Isfahan and the locals who joined them for a protest this morning. They shot the protesters with pellet guns and used tear gas. Dozens of farmers and young protesters have been wounded.

Protesters, including many of the courageous women of Isfahan, confront the security forces with empty hands and with chants of “death to the dictator,” “death to Khamenei,” and “Isfahani, cry out and demand your rights.”

They vowed not to leave “until water is returned to Zayanderud River.”

The protests took place despite the clerical regime’s attack and setting fire to the farmers’ tent at 4 a.m. Thursday morning, and despite threatening text messages to the people of Isfahan against participating in the protest.

The footages coming from Iran show women leading the crowd with their chants and rushing to the aid of those being beaten or arrested by security forces.

Some of the farmers and other participants in the protests have been wounded.

The number of protesters is swelling, and the confrontations are still going on as this report is being published. At least one woman was shot in the head and killed by security forces.

Troops respond with bullets and teargas to peaceful protests over water

Tens of thousands of people joined the farmers of Isfahan on the 12th day of a sit-in protest last week on Friday, November 19, 2021. The farmers have been demanding their water share from the clerical regime.

The people of Shahrekord also rose in support of Isfahan farmers, demanding their water share, as well.

The mullahs’ mismanagement of Iran’s rivers and water has led to the destruction of agriculture and livestock. Isfahan’s situation is particularly drastic where the watery Zayanderud river has dried up.

Zayanderud used to be the largest river on the Iranian plateau.

Hundreds of security forces stormed and attacked peaceful protesters that wanted to gather near the Pol-e Khaju Bridge at the dried river bed of Zayanderud on Friday, November 26, 2021. Thousands of the people of Isfahan rushed to support the protesters and clashed with the anti-riot special units. The people also clashed with police on the streets of Isfahan.

The two-week-long protest that farmers started, demanding their right to water share from Zayanderud, has now turned political, and the angry people and youth started chanting, “Death to Khamenei!” Women’s voices can be heard clearly.

Following a widespread call and despite warnings and repressive measures taken by the State Security Force, the brave young men and women of Isfahan gathered and protested along the Zayanderud River today, Friday, November 26. Immediately, the police dispatched special police units who attacked the youth with tear gas.

According to reports, one of the demonstrators who was captured by the security forces was later released by the people. The growing population has clashed with the police, and the resistance continues.

Support the courageous women of Iran and their struggle for freedom. 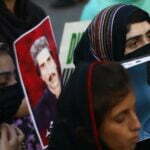 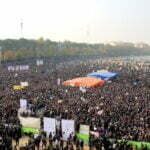